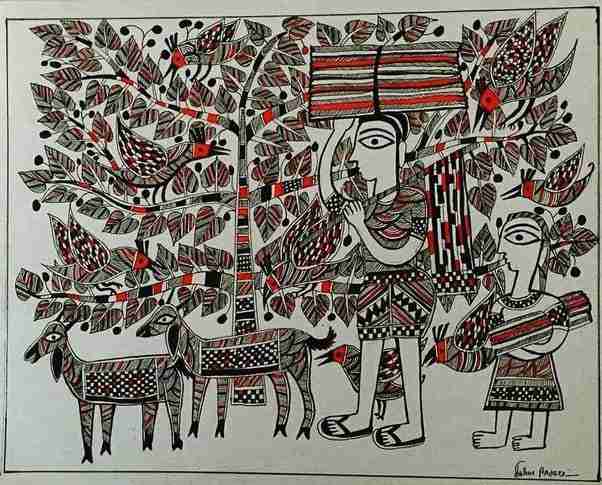 What are traditional art forms in India- With Pictures

India is rich in art and culture. They are passed down since generations and we are still proud of these traditional art-forms. India is a country that boasts of housing exquisite art styles from different time periods and different regions. Each having their own unique characteristic is what makes Indian art famous globally.

The main art-forms are :

Well, there are many more, because India has more than a thousand art forms. I’ll list the major ones:

Miniature painting : It is introduced by Persian culture by mughal emperors

Folk and tribal art : they include works like pottery painting metal art paper art weaving and designing of objects etc

Kalamkari: The beautifully crafted sketches of Kalamkari designs are mostly printed on cotton cloths and wear as traditional. Most of the printing contain peacock, Indian god/goddess prints,

“Digital design is like painting, except the paint never Dries”

“The object of art is not to reproduce reality, but to create a reality of the same intensity.”

2. Thanjavur painting is a classical South Indian painting style, which was inaugurated from the town of Thanjavur (Anglicized as Tanjore).

The art form draws its immediate resources and inspiration from way back about 1600 AD, a period when the Nayakas of Thanjavur under the suzerainty of the Vijayanagara Rayas encouraged art—chiefly, classical dance and music—as well as literature, both in Telugu and Tamil and painting of chiefly Hindu religious subjects in temples.

It is distinguished by its famous gold coating.

However, it can safely be surmised that Thanjavur painting, as we know it now, originated in the Maratha court of Thanjavur (1676–1855). It has been recognized as a Geographical indication by the Government of India in 2007-08. 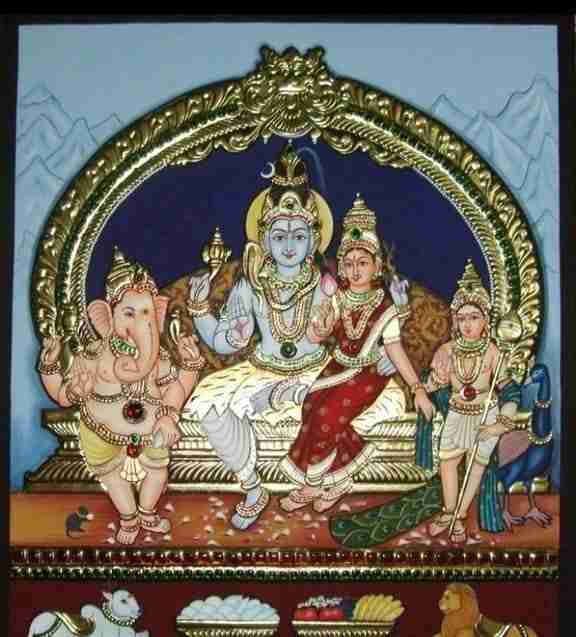 3. Bhil Painting are the form of painting from folk and tribal art that is practiced by one of the largest tribes in India. The Bhils are the second largest tribal community in India. 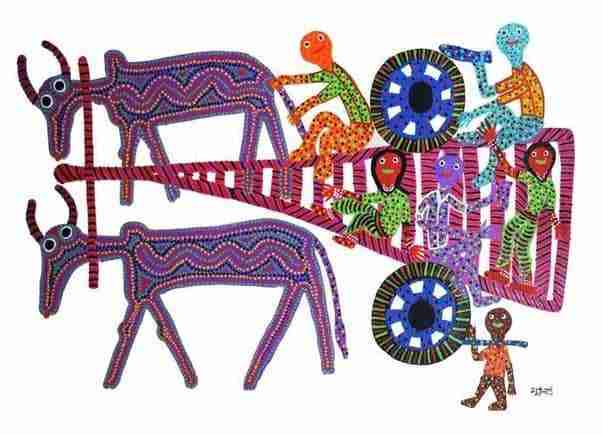 4. Kerala mural paintings are the frescos depicting Hindu mythology and legends, which are drawn on the walls of temples and churches in South India, principally in Kerala. 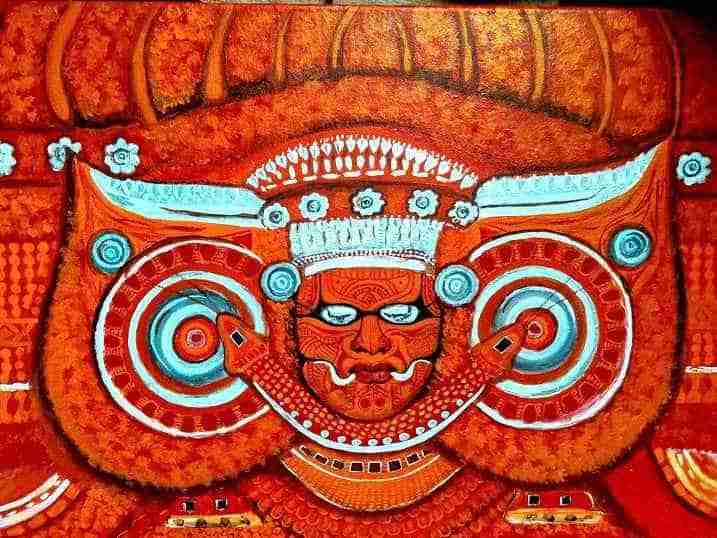 5. Gond Art is a form of painting from folk and tribal art that is practiced by one of the largest tribes in India – the Gond – who are predominantly from Madhya Pradesh, but also can be found in pockets of Andhra Pradesh, Maharashtra, Chhattisgarh and Odisha. 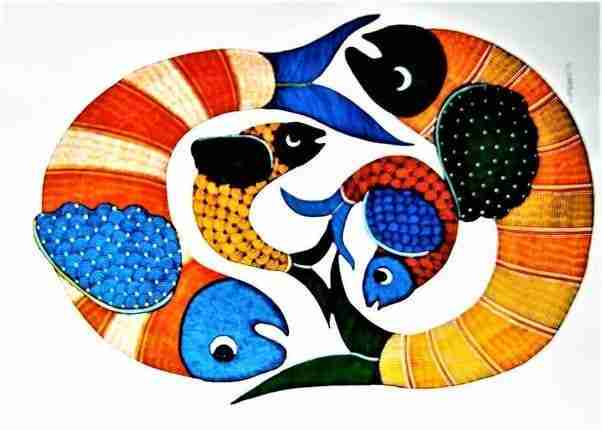 6. The Khovar Painting made in the bordering areas of Jharkhand, West Bengal and Orissa and considered as the old age tribal painting of India.

Khovar refers to the decoration of the marriage chambers, and idepicts the animals and plants of neighbouring forests and valleys.

The name Khovar is derived from two words: kho or koh (meaning: a cave) and var (meaning: husband). Symbolizing fertility, the mural-making takes place each spring during the marriage season. 7. Warli Art are form of painting from folk and tribal art that is practiced by one of the largest tribes in India with whom it shares its name. Warli comes from the state of Maharashtra in India. 8. Phad Painting or phad is a style religious scroll painting and folk painting, practiced in Rajasthan state of India.

This style of painting is traditionally done on a long piece of cloth or canvas, known as phad.

The narratives of the folk deities of Rajasthan, mostly of Pabuji and Devnarayan are depicted on the phads.

The Bhopas, the priest-singers traditionally carry the painted phads along with them and use these as the mobile temples of the folk deities, who are worshipped by the Rebari community of the region 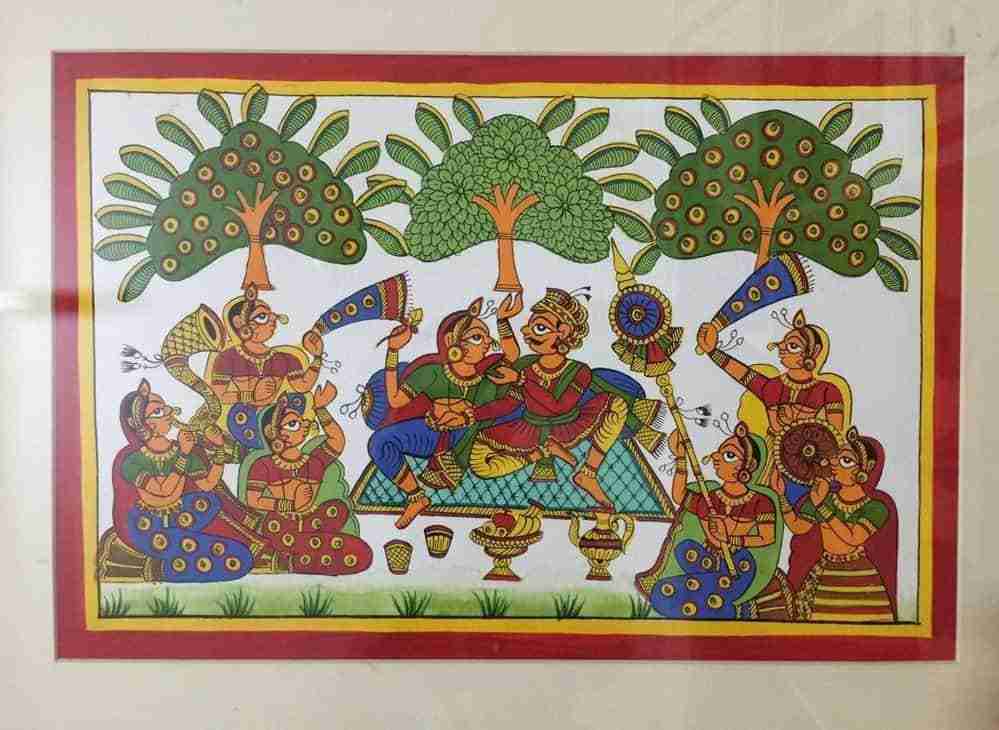 9. Chitrakathi Art: Chithra means painting and Katha means story, the art of storytelling through painting is known as Chitrakathi Art which is very popular in Maharashtra. 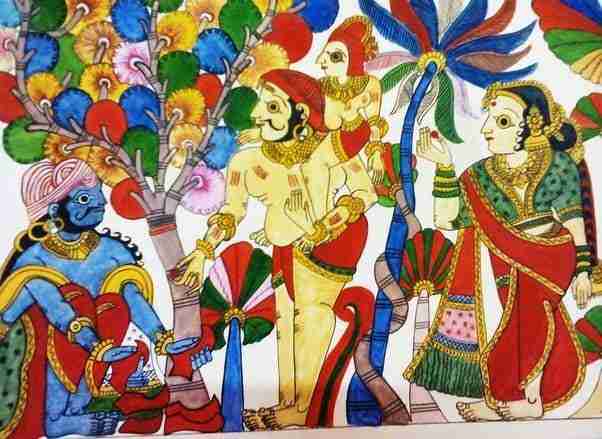